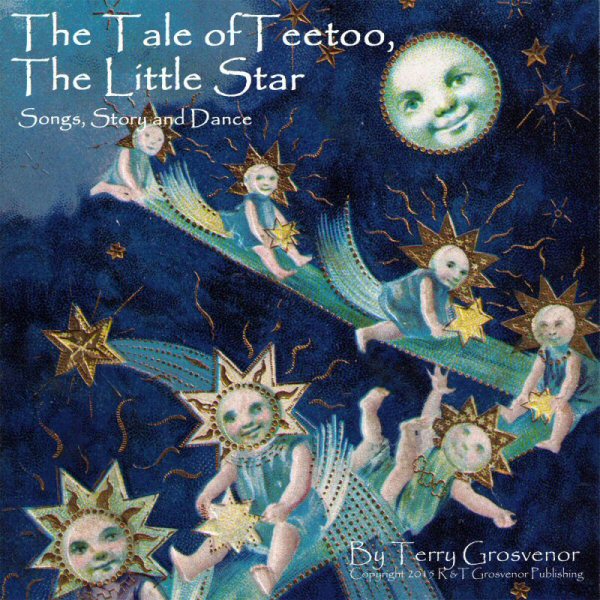 Join Teetoo the Little Star as he leaves the comfort of Mother Moon’s Star House on a quest to Earth to find the special child he will shine for. An original musical narrative perfect for dancers, dreamers and stargazers of all ages.

Terry Taffinder Grosvenor has written, arranged, and performed folk songs, pop songs, ballets, theme songs, and children’s music. To her, music is a mystery, and the creative process is a way to finally discover what has been waiting to be expressed; like many artists, often she does not know what she is going to create and has the feeling that it “flows through her” from some unknown place. Her songs vary in terms of tempo, mood, content, and world music styles, inspired by relationships, children’s poems, nature and animals, non-profit causes, and her travels to places such as Rio, London, Kenya, Tokyo, and all across the US. Now, with the Internet, her music has found a way to instantly travel to all of these places and beyond. Terry’s songwriting and performance have taken her to many exotic venues and have led to involvement in interesting projects such as: Performing at the American Embassy in London and with Sydney Lipton’s orchestra Working with Peer Southern Music Publishing in New York and Los Angeles Writing three theme songs for the World Scholar-Athlete Games, one of which was performed by a 110-voice choir of young singers at the Providence Civic Center for 8,000 people (including Aretha Franklin!) Composing a Christmas ballet, performed for three years by the Island Moving Company, based in Newport, RI Creating an album of favorite camp songs and the official Girl Scout theme song for Rhode Island Awards and distinctions include: ASCAP membership and an award for musical contributions Snapple Music Award for the World Scholar Athlete Games First prize for best female singer-songwriter at the Festival De Musica, Clube Alto Dos Pinheiros, Sao Paulo, Brazil Membership in the Rhode Island State Council on the Arts Soundtracks for two documentary films and a jingle for PBS TV