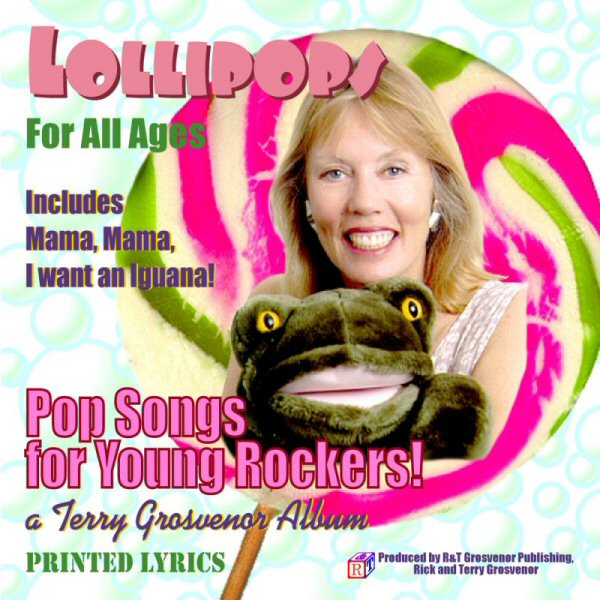 “Mama, Mama, Mama, I want an Iguana” and “Party Dogs” are just a couple of the catchy and clever songs on this album by international performer, Terry Grosvenor. These songs are big hits with teachers and parents as well as children of all ages.

Terry Taffinder Grosvenor is an internationally recognized performer and songwriter.  She has carefully crafted her children’s music to appeal to kids of all ages, especially those in kindergarten through fourth grade.  Her use of classic children’s poetry has drawn the enthusiastic acclaim of educators around the world and allowed these timeless themes to be enjoyed by today’s young minds, as well as fondly remembered by parents and grandparents.

In recent years, in addition to three children’s albums, she has composed the music for an eighty minute children’s ballet, three theme songs for the “World Scholar-Athlete Games”, hip hop recordings, the sound track for a film entitled “58 Harrison Lane,” and a collection of camp songs for the Girl Scouts of RI.  Your children and grandchildren will love Terry’s music and the classic children’s tales you knew as a child will be enjoyed by a new generation!

Mama, I’ve just seen the cutest little pet
He sits on a rock and he won’t be any trouble
He’s long and green with a skinny, pointy tail
And the pet store man said in a year his size may double.
They sell costumes that I can dress him up in
A leather vest and a little straw hat
When he gets bigger, I’ll walk him on a leash
And I promise you I’ll stop asking for a cat, a cat, a cat….

Come on, Mama, you’re really going to like him
He’s not that ugly and it’s better than a snake
Are you upset he might grow to six feet long?
If you let me have him, I’ll get up at daybreak
And clean the house, and rake the leaves
And eat up all my peas…
(I’ll give ’em to Joey – he loves vegetables)

Tell of the mermaids with long, flowing hair
Of sailors and hompipes and salty sea air
Of black-bearded pirates and treasures of gold
Of sharks and whales and stones of old

Three Billy-goats by the name of Gruff
Thought themselves not fat enough
And looked out for a place where they could eat
Saw, over the river, a sunny knoll,
But the bridge was long,
And the stream was strong,
And under the bridge lived an ugly troll.

The Troll called out, with a surly frown
“Who’s that tripping, who’s that skipping
Over my bridge?, I’ll gobble him down!”

It’s only a tiny Billy-goat Gruff
Please don’t eat me!
For I’m very little and lean and tough.
Wait for the other, wait for my brother,
The second Billy-goat will soon pass by
He’s bigger and fatter than I!”
“Run on”, said the troll, “I’ll see”

Along came the second Billy-goat Gruff
With his coat of shaggy stuff
He stepped up on the budge and tried to cross
And the Troll called out, with a ugly frown
“Who’s that tripping, who’s that skipping .
Over my bridge?, I’ll gobble him down!”

“It’s only the second Billy-goat Gruff
Please don’t eat me,
I’m bigger but I’m mostly fluff
Wait for the other, wait for my brother,
The third Billy-goat will soon pass by.
He’s bigger and fatter than I!”
“Run on”, said the troll, “I’ll see”

Along came the third big Billy-goat Gruff
He stalked on the bridge all burly and rough
It creaked and groaned and the wood began to snap
And the Troll roared out, with an awful frown,
“Who’s that blundering, who’s that thundering
Over my bridge?, I’ll gobble him down!”

Tis I the great big Billy-goat Gruff
Come out from under that bridge and see!”,
And his voice was heavy and hoarse and tough!
I am the other, I am that brother,
The biggest and the fattest and the baddest of all three!”

Then on his homs all crooked and bare,
He tossed that troll into the air.
He flew so high that he never came down again
And the Billy goats ate up on that knoll
They sure took care of that wicked troll
And that’s the story of the Billy Goats Gruff

I just found a four leaf clover
At my feet when I looked down
Now I start to smile all over
I jump up high, off the ground

I’ve got a feelin’, somehow
I know This happy feeling is bound to grow
It could be my lucky, lucky day

Then I find a daisy flower.
I pick off petals, one by one.
When it lands on he loves me
I kick my heels and off I run.

Luck can come and luck can go
It’s up and down like a yo-yo
Try to stay happy and just maybe
You’ll feel lucky, wait and see.

Good things have been happenin’ to me
I’ve got extra luck to spend
If you want, I’ll give you some
It’s fun to share it with a friend

Have you ever wondered what your dogs are up to while you’re away? – We have.

When I’m feeling bored and it’s getting late
I just gotta go, can’t procrastinate
I jump to my feet, I start to salivate
It’s time to move, and I just can’t wait

My tail starts to spin around and around
When I hear that crazy pounding sound
The beat gets me going, it makes me feel so fine
I call to my friends who live next door
Come on to my house, lets hit the floor
When we get together – doggone, we sure do whine

When the master’s gone, it’s time to play
We shake our bones and move the rug away
We get down on all fours, and we beat the ground
We lift each leg, then we slide it down

We put on rhinestone collars and slick down our fur
We shake our bodies ’til the cats all purr
That’s why we’re dog-tired after staying up all night
We scratch our ears and we shake our jowls
When the moon is out, you can hear our howls
When we have a party, doggone we do it right

We are party dogs…

The River Nile, Based on an old camp song
Terry & Rick Grosvenor ©1994

Shut-Eye Train, Based on a poem by Eugene Field,Terry T. Grosvenor ©1997

Come, my little one, with me!
There are wondrous sights to see
As the evening shadows fall;
In your cap and gown,

Don’t detain the Shut-Eye train-
Ting-a-ling!’ the bell goes
‘Toot-toot!’ the whistle blows,
And we hear the call:
“All aboard for Shut-Eye Town!”

Swifter than a wild bird’s flight,
Through the realms of fleecy light
Through the blue where bloom the stars
Mother Moon looks down

Heavy are your eyes, my sweet,
Weary are your lithe feet
Nestle closer up to me
In your cap and gown;
Oh, the sights that we shall see!
Golden dreams for you and me

“Toot-toot!” the whistle blows,
And we hear the call
“All aboard for Shut-Eye Town!”

I wake up in the mornin’
And there’re kids in my bed
One’s pushing me out,
One’s sitting on my head

Then I hear the patter of
busy little feet
Mom, I’m really hungry,
Get me something good to eat

I dress them, I feed them,
I brush their teeth and comb their messy hair,
We put on shoes, hats, coats and gloves
And run for the door
The bus is there, the bus is there.

The days rush by so quickly,
I don’t seem to get much done
The work load just gets bigger,
it’s got me on the run

There’s Boy Scouts and Girl Scouts,
And Little League and soccer and ballet
I’d really like to stop and chat,
but I don’t have the time,
I’m on my way, I’m on my way…

I’ve got to be patient,
I’ve really got to try
But, I have those days
When I could just break down and cry

“Will you walk into my parlor?” said the spider to the fly
‘Tis the prettiest little parlor that ever you did spy
The way into the parlor is up a winding stair
And I have many things to show you when you’re there°

“I’m sure you must be weary from soaring up so high
Come rest upon my pillow” said the spider to the fly.
“I will close the curtains, the sheets are fine and thin
Why don’t you sleep awhile and I will tuck you in.”
Oh no, no, no, no…,

The spider turned around and went into his den
He knew the silly fly would soon be back again
He wove a silky web in a corner way up high
And set his table ready to dine upon the fly
He went to his door and he began to sing,
“Please come back, pretty fly, with your silver wing
Your robes are green and purple, there’s a crest upon your head
Your eyes are like diamonds, but mine are dull as lead”

You’ve got to walk before you run.
You can turn your work into fun.
You’ve got to learn to paddle before you can swim.
Learn from mistakes, they will make you strong.
You’ll learn the difference between right and wrong.
Trust yourself, you can do it. You can do it!

You can really go some where.
Little steps will take you there.
You can climb the highest stair.
And build your castles in the air.
Take your time to let dreams grow.
You’ll get where you want to go. (Repeat)

The Chicken Song, Based on an old poem Terry T. Grosvenor ©1997

If this song is making you hungry
and you wish you were a bird
We can find you some tasty things
– just say the word.

I’m so tired and you’d be too,
If you stayed up late the way I do.
My eyes are closing, can’t hold up my head
And I really want to go to bed, But –

I am so tired, and you’d be too
If you stayed awake the way I do
My eyes are closing, can’t hold up my head
And I really, really, want to go to bed – But!

Right outside my door,
There’s a party going on…

I am so tired, you would be too..
If you stayed awake the way I do!
My eyes am closing, can’t hold up my head
And I really, really want to go to bed -RIGHT NOW!

This compilation was produced and digitally mastered by R&T Grosvenor Publishing in Newport, RI at may not be reproduced, stored in a retrieval system, or transmitted in whole or in part or by any means, electronic or mechanical, photocopying, recording, or otherwise without the prior written permission of R&T Grosvenor Publishing